Film in original language, lectures, DVDs / books on loan. The best of the English language, in Trieste!

The British Film Club Trieste has always been involved in providing its members with the best English-language films in the UK and the Commonwealth. In addition to the screenings in the cinema, we add to our experience of weekly meetings at the Circolo Fincantieri-Wärtsila in Galleria Fenice 2 (1st floor) in the Sala Fenice (Sala –foto) and a great collection of borrowed films / books and of course much British humor!

Dear Members,
As you probably know, as a result of the DPCM which came into effect on Monday 25 October 2020, all cinemas in Italy have been closed until November 24 th , including the Ariston Cinema, and we have no choice but to cancel the first film of the season, “The Good Liar”. We hope to resume our programme as soon as possible, and we shall recoup any films that have been missed.
The Circolo Fincantieri-Wärtsila in Galleria Fenice 2 has also closed for four weeks until November 24 th , 2020 and so our conversations/discussions are temporarily suspended. The Annual General Meeting planned for November 4 th has been postponed – we shall let you know when the new date has been decided.
Our clubhouse in Via dei Crociferi 3 (ground floor) will be open as usual on Tuesdays and Fridays from 4.00 to 6.00pm for borrowing and returning DVDs and Blu-rays – beginning Tuesday 3 rd November, 2020. You can also buy your membership card there, if you haven’t had time to come to Via Torrebianca or buy it online.
WE DO HOPE TO SEE YOU SOON – WE’VE MISSED YOU!
Judy Moss (on behalf of the Committee) 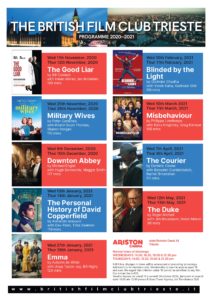 The greatest experience is the encounter. You can speak and share the same language, by passion or origin joins all club members!

Movies in the room

We offer 9 films per season, recent and coming from England / Australia / Canada.

We offer a large library of books and DVDs in the original language, all available for temporary loan to our associates.

These are the realities with which we collaborate in order to offer the screenings, discussions and updates of BFC Trieste!